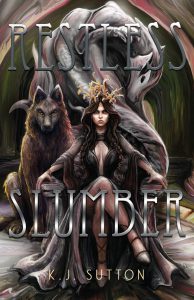 Fortuna Sworn left Fortuna with a lot of problems to deal with. She just became queen of the Unseelie Court, Damon still hasn’t forgiven her for what happened with Jassin, Fortuna is unsure of her feelings towards Collith and Ollie, Fortuna is stuck with a werewolf and last but definitely not least, Laurie isn’t who he said he was. If those problems weren’t enough, Fortuna made more enemies in Restless Slumber.

After Fortuna Sworn, it was clear Fortuna would do anything to save her loved ones. It was one of her strengths as a protagonist. However, I believe that in Restless Slumber, she did too much. She lost herself. It reminds me of Feyre in the beginning of A Court of Mist and Fury, but worse. I truly hope that Fortuna will find some happiness in Deadly Dreams, because she’s been through too much.

Collith stole my heart in Restless Slumber. I liked him in Fortuna Sworn, but he swept me away this time. I want to read and know more about Collith and his past. He still has a wall around him, but he’s opening up and that made me really happy while reading the book.

Laurie had my heart after Fortuna Sworn and still hasn’t lost it. He’s still the same witty guy with an answer to everything and I truly have a weakness for that type of characters. Laurie keeps swooping in and saving the day, but I expect he will expect something in return in the following books.

When I had only about 70 pages left, I started wondering “So what’s the plot of this book? War with werewolves, Damon’s recovery, or is it mainly about giving the reader background information?”. But man, the last 50 pages, they wrecked me. I am not okay with this. I want the next book but I also don’t want the next book. I know my heart will break from the aftermath of Restless Slumber, so I’ll have to mentally prepare myself before I start reading Deadly Dreams.