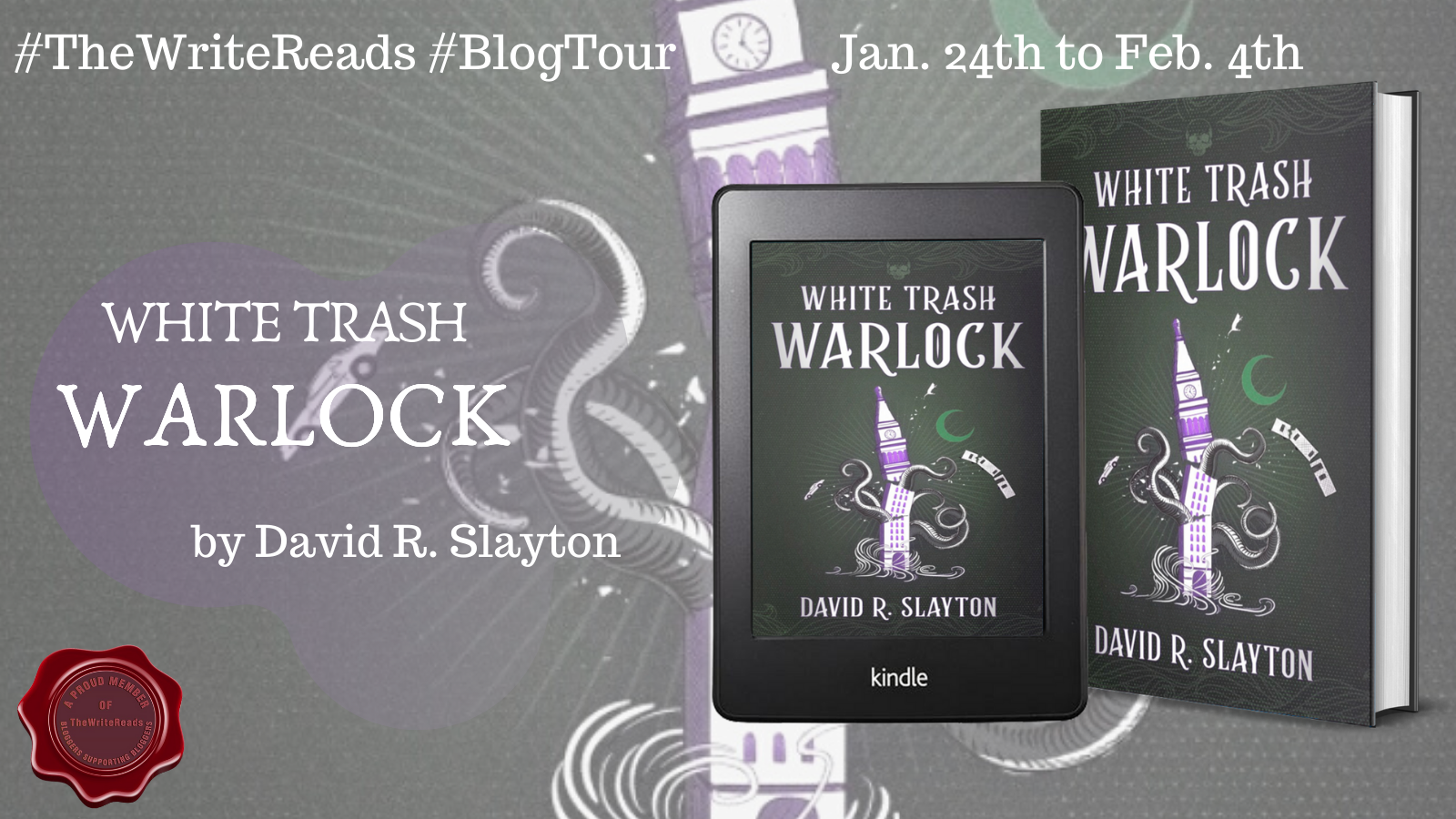 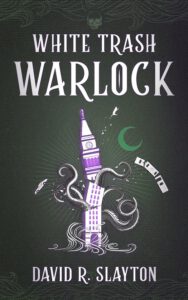 I FINALLY have time to actively start blogging again! And what better way is there to start again other than a Blog Tour?! That’s right, A Blog Tour is the best way to get back into blogging. The Featured book this time is White Trash Warlock, by David R. Slayton!

I’m going to start with the most frequently used introductory sentence in the history of reviewing and say: White Trash Warlock is an urban fantasy novel that follows Adam Lee Binder. Adam is able to see the Spirit World, a different realm. Unfortunately, Adam being different was reason enough for his brother Bobby to send him to a mental institution.

Years later, Adam is living in a trailer park with his aunt. After not having spoken to Bobby for years, Adam receives a text from him saying that Bobby needs his help with his wife. Bobby’s wife has been going crazy and he needs Adam to see what’s wrong with her and fix her. Adam caves and goes to Bobby, but when Adam finally arrives, he sees that the problem is much bigger than he first realized…

First of all, Adam is a well-written, complex character and I just want to hug him. Everything he feels and does is reasonable and so very human. He doesn’t have a ‘I’m the hero and I have to save the whole world on my own!’ vibe so many other protagonists have and I love it.

I’m not going to start about Bobby because he did not grow on me at all, not even during his POV’s. Can I just pretend he doesn’t exist? Is that possible?

AND OH MY GOD VIC YOU’RE AMAZING AND I COULD READ A WHOLE BOOK ABOUT YOU AND YOUR LIFE. Okay now that that’s out of the way, I can calmly say that I loved the romance in this book. I usually hate hate HATE insta love but this was very well written in my opinion.

The world had so many awesome fantasy aspects that it was never boring. I even laughed out loud at some points. The pace was quick and comfortable

Even though there were many things I like, especially the fact that I have strong feelings about almost every character in this book (both good and bad), there was one thing that bothered me. The book was a little confusing at some points. I’m not sure if it was me or the writing style, but I feel like some things happened quite randomly. That made the story harder to follow and caused that I wasn’t completely sucked into the book. Unfortunately that’s one of the most important things for me when rating a book.

White Trash Warlock is a witty, pleasantly-paced urban fantasy. Even though the randomness made it hard to follow at some points, the book was never boring! You should definitely read this book if you enjoy an awesome protagonist!

Not all magicians go to schools of magic.

Adam Binder has the Sight. It’s a power that runs in his bloodline: the ability to see beyond this world and into another, a realm of magic populated by elves, gnomes, and spirits of every kind. But for much of Adam’s life, that power has been a curse, hindering friendships, worrying his backwoods family, and fueling his abusive father’s rage.

Years after his brother, Bobby, had him committed to a psych ward, Adam is ready to come to grips with who he is, to live his life on his terms, to find love, and maybe even use his magic to do some good. Hoping to track down his missing father, Adam follows a trail of cursed artifacts to Denver, only to discover that an ancient and horrifying spirit has taken possession of Bobby’s wife.

It isn’t long before Adam becomes the spirit’s next target. To survive the confrontation, save his sister-in-law, and learn the truth about his father, Adam will have to risk bargaining with very dangerous beings … including his first love.