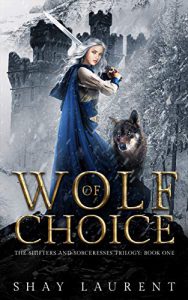 Woops it’s been a while since I posted! Due to the Corona virus I have been volunteering almost non-stop in a supermarket, with unfortunately no time to read. Now that I have a week off, I’ll finally be able to catch up on all my reading!

I hope everybody is safe and well. Even though this post won’t be read by a lot of people, I just want to remind you to please stay home.

Elita White is a wolf shifter of almost 16 years old. She lives among humans with her father, separated from the wolf packs. Because wolf shifters make their first shift when they turn 16, all shifter kids go to the Academy in the year they turn 16. Elita has been begging her father to let her go to the Academy, but he wouldn’t budge. But with help from Miss Stone, Elita finally managed to convince her father to let her go. However, almost immediately after Elita arrives at the Lupine Academy, she discovers a truth about her life and leaves the Academy to go on an other adventure.

Okay. Let’s start with the positive things about Wolf of Choice. First of all, it somehow managed to grip me at about 2/3 of the book. I don’t know how, because I often thought of DNF’ing this book. I just had to know how it would end.

Second of all, THAT CLIFFHANGER. It was very well written and unexpected. That’s all I can and will say, I don’t want to spoil it.

And finally, the cover. It is absolutely STUNNING. I think it’s one of the best covers I’ve ever seen.

And now we’re on to the things that weren’t so good in Wolf of Choice.

Let’s start with the world building. It was practically non-existent and left me with so many questions. At first I thought I was reading an urban fantasy. The only ‘special’ thing in the world was the existence of shifters and sorceresses and their own world. But there was no mention of phones and the characters travelled by foot or horse. Neither was there background information about the world they were living in. So even now, after finishing the book, I still don’t know what world I have to picture when reading it.

Okay, the next thing that bothered me throughout this book was: Why do the sorceresses and shifters hate each other that much? Okay, the Crones made one big pack into three by causing distress and several deaths, but what about the sorceresses created by the Ladies of the Light? They work with the shifters to keep peace, but they are still considered enemies. Why?

And now the characters. Elita seems OBSESSED with what people think of her. It influences the way she acts and reacts to everything. In a contemporary book, I wouldn’t make such a big deal about this. But COME ON Elita, you have bigger issues here!

Elita made a friend at the Academy: Dom. Dom seems like a nice kid. He’s the son of the Beta, which means that his father has quite a lot of responsibility. He helps and supports Elita during her first weeks at the Academy as the nice kid he is. But when Elita leaves the Academy, he comes along with barely any hesitation, even though it’s the worst timing possible. Seriously dude, what are you thinking?

I believe there are quite a lot of people who will enjoy reading Wolf of Choice. It’s a short, easy read with a fast pace. It just wasn’t my cup of tea. According to me, the story could have been much better with 150 extra pages to lower the pace and give some extra information about the world. I truly hope Shay Laurent will do this in the next book of the trilogy, which I will definitely read because of that DAMN CLIFFHANGER