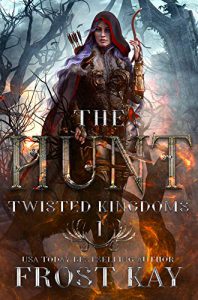 I really should stop reading books during my exams, I just keep procrastinating. Even though Frost Kay potentially ruined my grades by writing this book and allowing me to review it, I want to thank her for providing me with an ARC of this book.

The book starts with the history of The Twisted Kingdoms: it states how a world where Elves, Shapeshifters, Giants, Dragons, Humans and Merfolk used to live in peace with each other, but then grew hostile towards each other.

17-year-old Tempest has been training almost all her life to become a Hound: the king’s assassins and warriors. If she passes her final trial, she will become the first female Hound in the history of Heimserya, the land of the Humans.

After making a dangerous bargain with her King, Tempest had to infiltrate the enemy and kill The Jester, their leader. But in The Hunt, Tempest learns that she never knew everything that was going on. She discovers things that make her question everything she stands for. Do Tempest’s loyalties lie in the right place?

I ADORED this book. The Hunt was incredibly hard to put down. I really connected with some of the characters and it’s been a while since I’ve felt that way. The only thing that troubled me a little was the world building. Kay started the book wonderfully with the History of The Twisted Kingdoms, but she hardly explained the world and its inhabitants throughout the book. That made it hard to follow at some points. One example is that the book mentions shifters, but I can’t remember it being explicitly stated that they can shift between an animal form and a human form. It took me a while to figure that out.

Next read: Moonburner, by Claire Luana