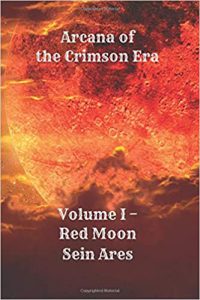 I received a free copy of Red Moon from the author, but this doesn’t affect my review.

Red Moon by Sein Ares follows several characters who each have their own journey to make. It mainly follows Elizabeth Raven, Mia Yuuki and Leo Aquarius, but it has some other pov’s as well. The story is set in an elaborate world with its own history, hierarchy and magic system. I have a lot of respect for Sein Ares, as he is one of the few authors who takes the effort to explain everything behind the magic system. Instead of the usual “This is his power and he has to keep in mind this and this or it will drain him”, it also explained how it works.

As I already mentioned, it’s a very elaborate world. The way Sein Ares handled the world building in the book, wasn’t the best way to give information to the reader. In Red Moon, information about the world was mainly given when characters explained things to other characters. While this is a good method to use in urban fantasy, the world in Red Moon is just way too elaborate to do this.

At first, I struggled with Red Moon. It was hard to follow everything because of the writing style. In the first half of the book, almost everything consisted out of characters speaking to each other. This made the book a bit amateuristic for me, especially because the characters always speak to each other in fighting scenes. An example is:

“This? Just an equalizer, to level the playing field.”
“Equalizer?”
Jenny planted her left foot forward and cleared the right leg out of the way. Her right hand arched back.
Tanya’s lips curled into a smile. “A Zeor dash? Interesting!”
She lifted her katana to the skies with both hands while putting her right leg forward. “I will knock you down before your wings reach me.”

After getting used to the writing style, it became harder and harder to put it down. I was able to see past the writing mistakes and really started to enjoy the story. I especially liked Leo, because he was an incredibly weak character in contrast to the rest. It was refreshing to read about a character with flaws that didn’t just disappear halfway through the book.

Red Moon is unique in every way. I haven’t been able to compare the world and the magic system with anything else. The book has its flaws, but I’m sure Sein Ares will write a good sequel with a little more practice. Red Moon is definitely worth the read!