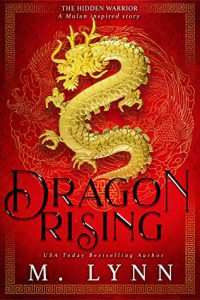 I’m so glad I was able to read an ARC of Dragon Rising! It’s a Mulan inspired story, but with a huge twist, because being a woman pretending to be a man isn’t the only thing that Hua Minglan has to hide.

When reading the note from the author before starting the story, I came across the following sentence:

Also, please forgive the addition of live dragons. Those did not exist in ancient China.

That was it. That was the moment I had high expectations. Not only showed M. Lynn that the had a good sense of humour, but the book WOULD HAVE DRAGONS!!!!

I expect you know what happens in Mulan. In Dragon Rising, Hua and her family are invited for the festival of the dragon by the new emperor of Piao. Everything is going fine during the festival, until the Kou attack and Hua’s sister is killed. Afterwards, Hua wants nothing more than to get revenge for what happened to her sister. So, as you probably know from Mulan, she pretends to be a man and joins the army to wage war against the Kou.

Jian is the commander of the Piao army. After most of his men died in a trap set by the Kou, he started training new recruits. Despite being an honorable man, rumours are going through the camp that he deliberately lead his men into the trap. Because of this, Jian is struggling to keep the confidence of his men, while also dealing with his past.

Dragon Rising is a well-written retelling. All of the characters have a lot of depth and the character growth is amazing. I love the twists M. Lynn gave to the story. I haven’t mentioned them all, so you should read the book for the rest of them!

P.S. If anyone knows other Mulan retellings, please tell me. I need more.